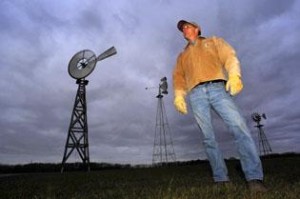 Paul Behrends stands in his backyard near Foosland on Nov. 7, with three of his four restored windmills in his collection. (The Pantagraph/STEVE SMEDLEY)By Steve Smedley – ssmedley@pantagraph.com

FOOSLAND — With a bitter wind from the west, what’s left of a brief winter day’s sun dips below a leaden sky west of Foosland. Paul Behrends stands in his backyard  surrounded by three ancient windmills he has restored and displayed in his yard. For Behrends, his passion rides on a good wind.

“I’m a windmiller,” says Behrends. “I travel around mostly Illinois and the surrounding states.”

“I work on, replace, rebuild traditional water-pumping windmills,” he said. “These are the old-fashioned kind that are mostly junk relics today, but every now and then you’ll see a nice one that’s spinning.”

Though few windmills are left on the rural landscape, and even fewer are in good shape, Behrends is driven to keep the icons of a simpler time alive.

“I like the hands-on aspect of the work, the fact that I am saving a bit of history,” he said. “These old farmsteads, silos and livestock barns and windmills are a disappearing aspect of Americana.

“I have been doing this job for about 17 years. I really enjoy it. I am a machinist and fabricator with some engineering background.”

Behrends, who operates Behrends Windmill Service from his rural Foosland home, says his gem is the Perkins windmill manufactured in 1885 in Mishawaka, Ind. “It’s one of the most beautiful windmills.”

His passion began long ago.

“I thought it would be kind of neat to find and rebuild a working windmill and put it in my yard, years and years ago,” he said. “Well, I did, and the next thing I knew, I had people calling me asking me to help them rebuild their windmill.”

The work is in Behrends’ blood.

“My great uncle Wendel Dean used to be the executive vice president of the Aermotor Windmill Co. They were the largest windmill company in the world,” he said. The business was founded in 1888 in Chicago and still makes windmills in San Angelo, Texas.

Behrends said he was blessed to be able to talk to his late uncle about the business and learned much from him. The out-of-print “Field Guide to American Windmills” is his bible on the subject.

“Not to sound egotistical, but there doesn’t seem to be anyone, at least local, with the knowledge I have of the history, the mechanics and the installation and the wherewithal about windmills,” he said. “I enjoy sharing my knowledge with other people and it’s nice to make a few bucks on the side too.”

Adjacent to his shop is a large pole barn filled with replacement windmill parts he has gathered over the years. A large map of the Midwest in his shop is dotted with small colored pins marking towns where his restored windmills catch a new wind.

Each windmill job is different. A repair he might guess would take 20 minutes may take most of a day. Behrends was approached recently by a woman in rural Dwight, asking if he’d take a quick look at her old windmill that was making more noise than usual. Behrends ended up spending a few hours making emergency repairs because it seemed ready to fall.

“I couldn’t just walk away from it knowing it might fall and damage something, or hurt someone,” he said.

Working several stories up can be dangerous, and Behrends is careful to check the weather before he climbs a windmill. He has only had one scare while installing a windmill. The wind suddenly picked up, causing the blades to spin wildly and strike his back. He quickly stopped the spring windmill and continued with his work, but he learned not to work when he is tired or the weather is bad.

Back to working order

On a Sunday morning in November, Behrends climbed the tower of the old windmill at the Dusty Lane Farm in rural Ellsworth. Three generations of the Parker family were on hand to help.

With the modern-day windmills from the Twin Groves Wind Farm in the distance, Doug Parker and his son Shawn, 15, worked with Doug’s father, Hugh, as they steadied three guide ropes as the replacement windmill head was raised. Behrends worked 30 feet above the ground. He doesn’t use gloves because the work is too intricate.

Behrends explained to Shawn, who will have the yearly job of changing the lubricating oil in the windmill, that he is lucky windmills were improved many years ago.

“The farmer used to have to climb the tower and oil the windmill once a week,” he said. Oil bath windmills, introduced in 1912, were designed with a small pan, much like an oil pan on a vehicle, in which drive gears run within a pool of lubricating oil.

As the repaired windmill began spinning silently in the wind, Doug and Shawn carried away the bullet-pocked vane from the old windmill. They plan to use the vane as a conversation piece.

Behrends was thrilled to hand off the project to a family that values the windmill.

“Now we have Shawn all trained to be the maintainer of the windmill. We know this one’s going to last a long time.”